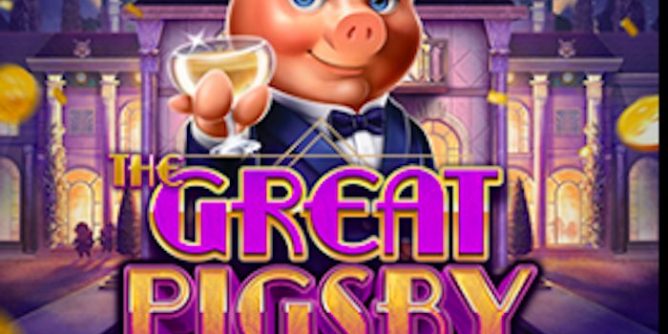 The new slot is called The Great Pigsby Megaways™ and is already available in many real money Canadian casinos.

This isn’t in fact the first time that we have come across The Great Pigsby. This decadent young throwback to the 1930s is styled on F Scott Fitzgerald’s The Great Gatsby, always surrounded by lavish excess, quaffing champagne and standing outside his enormous mansion.

Fans of Big Time Gaming’s popular slots like Bonanza Megaways™ will be familiar with the set-up here – a six-reel game with up to seven rows per reel defined by a random reel modifier system on each spin. That gives up to 117,649 paylines active at any one time.

The Great Pigsby Megapays™ boasts stunning graphics and gameplay driven by wilds that substitute for all other symbols to form wins as well as collecting in a piggy bank at the top of the screen.

When enough wilds are collected they will randomly trigger any one of three features: 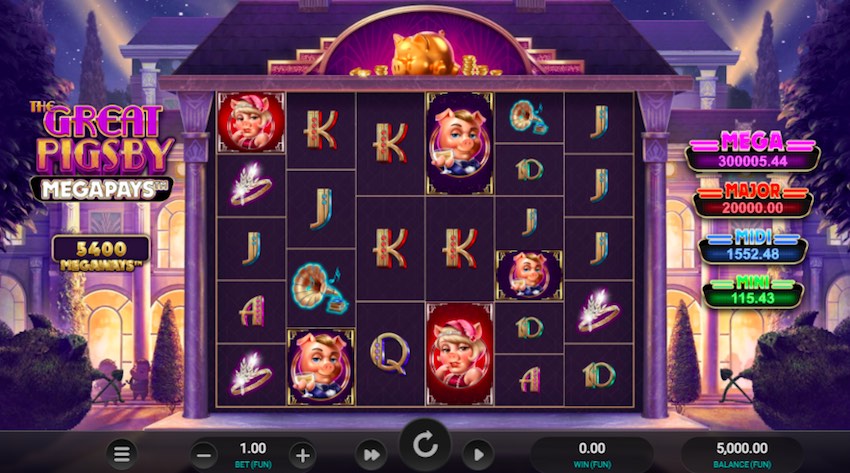 The highlight of the game however is the Megapays™ jackpot feature round that can trigger randomly at any time.

During this round one symbol is chosen as the Megapays™ one from the low paying icons, 9 through to Ace. After a spin, if Megapays™ symbols are present on the reels they are collected at the bottom of the grid. Another spin then occurs and the process repeats until either no more Megapays™ symbols land or the biggest Mega Jackpot is won.

There are four jackpots available in this game:

The Great Pigsby Megapays is going to join a short but growing list of games featuring Big Time Gaming’s new progressive jackpot engine. Others in the series include Bonanza Megapays™ and Who Wants To Be A Millionaire Megapays™.

Relax Gaming’s Chief Product Officer, Simon Hammon, says the team are excited to be launching this new game: “We couldn’t be more thrilled to welcome The Great Pigsby back to our screens! He’s a firm fan-favourite, and we’re confident players will enjoy this release thanks to the impressive Megapays Jackpots and lucrative bonus features and mechanics.

“We always strive to drive differentiation at Relax, and I believe The Great Pigsby’s return showcases exactly what makes us special at Relax – offering an unbeatable catalogue of premium games loved by players the world over.”

This isn’t the only piece of progressive jackpot news from Relax Gaming in the last month. They also recently announced the launch of their Dream Drop Global Jackpots series at the end of March.

This will be a five-tiered jackpot game featuring Rapid, Midi, Maxi, Major and Mega Jackpots with a top prize of €10,000,000! The first game to feature this new prize system will be Temple Tumble 2, the follow up to the original popular grid game.

Relax Gaming are fast becoming one of the most exciting slots developer and aggregators in the business with a catalogue of games that includes classics like Money Cart, Cluster Tumble and Dead Man’s Trail.

They are truly a worthy addition to the list of Canada online slots providers.